NSW Church and Ceremonial ParadeOn Sunday 21st May the Cadets and Officers of NSW Boys and Girls Groups took to the streets of Sydney for the Annual Church and Ceremonial Parade. Starting the day with a multi-denominational service conducted in the Scots Presbyterian Church, the Air League then assembled in Martin Place for a parade through Sydney including a wreath laying ceremony at the cenotaph. 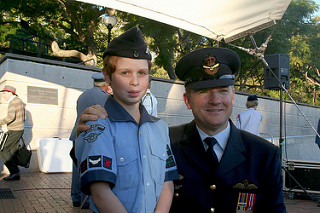 SQNLDR Simmons and a young future aviator at NSW Ceremonial Parade 2013Continuing on to Tumbalong Park Darling Harbour, the parade was inspected by the Reviewing Officer, SQNLDR Paul Simmons of the RAAF. A former Air League cadet himself, SQNLDR Simmons has achieved a number of highlights in his career including;

In 2011 he was awarded the Oswald Watt Gold Medal for “The Most Notable Contribution to Aviation by an Australian”. This was the first time the award had been awarded since Australian astronaut Paul Scully-Power in 1999.

As well as all these achievements, SQNLDR Simmons has also found time to establish LIFT Youth Development, a charity working with ‘at risk’ youth and their support network that offers programs that teach risk management and decision making life skills while building their self esteem.

Following a parade inspection by SQNLDR Simmons, members were presented awards for achievements throughout the year as well as on the march that day. A great day was had by all and we thank the guests and the parents, families and supporters for their assistance in helping the cadets to achieve their best over the last year. Photos of the day can be seen here.

For more information about the LIFT youth development program and to make a donation, visit their website at www.lift.org.au