Cadets and Squadrons of the Australian Air League jetted in from across Queensland to take part in the Queensland Group annual state competition, the Group Review, at Mapleton Qld on the Sunshine Coast over the weekend. 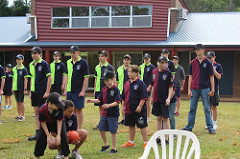 The Australian Air League is a youth organisation, for boys and girls from 8 to 18 years, which provides cadets with leadership and life skills while encouraging interest and participation in aviation as a career or hobby.

With the level of competition in all activities and events reaching greater heights every year, 2013 proved no exception with record entries in several categories. Initially challenging, the wet weather broke to enable the Air League Cadets to compete in ceremonial drill competitions, including Flag Party and Squadron on the March, supplemented by education & aero-modelling displays as well as ball games challenges.

The Cadets also made the most of the opportunity for inter-regional socialising and fellowship – many describing this as one of the most valuable elements of their Group Review experience each year.

Further photos of the day can be seen online here. 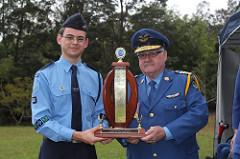 The Australian Air League – Queensland Group also broadcast widely, in the lead up and during the Review, its call for expressions of interest in establishing a new Squadron offering its leadership and aviation programs to the youth of the Sunshine Coast.