Recently Berwick Squadron held a Flight Simulator night where the cadets all had a chance to try out three different flight simulator activities running the hall.

In one section we had four computers running Flight Sim X all networked together so every pilot had visibility of all other pilots flying. This allowed them to practice formation flying and to also chase each other, continuously changing their planes to be faster aircraft so they can stay ahead the rest. We had one PC with full Yoke, throttle and pedal controls, two with yoke and throttle controls and one with joy stick control. 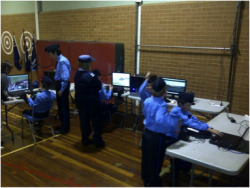 In another area we had Radio Control Flight simulators. This allowed the cadets to practice flying radio control aircraft within the expense when they crash. One controller was a proper radio control simulator control box and the other was a USB PS3 controller.

Using these RC flight simulators was a great start for people who had never before flown real RC aircraft, it enabled them to learn the controls and the aircrafts reactions prior to moving onto the next activity.

Our final Simulator experience was indoor radio control aircraft flying, these small foam twin engine aircraft are a great way for the cadets get some real experience in basic radio control aircraft flying, with the fear of breaking them, as these little planes have been smashed into many wall and still get up and fly again. We had three aircraft onsite, one to fly whilst the other two were charging. This ensured that all aircraft were fully charge prior to the next flight. 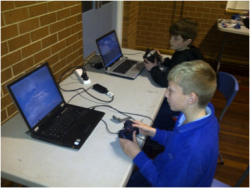 All activities were timed according to the small radio control aircraft as their batteries would only last 15 minutes, so when the battery went flat everybody had to change and allow other cadets to gain some flying experience and have some fun. 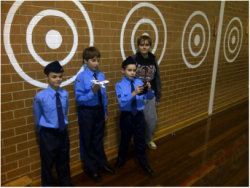