An e-version of the Summer edition of the Air Force Association’s Wings magazine can be accessed on line via the new Wings website: www.wingsmagazine.org.

Apart from the regular digests and information, this edition includes:

Federal Routine Order 14/2020 contains updates regarding the National Redress Scheme and is available to download from the link below. 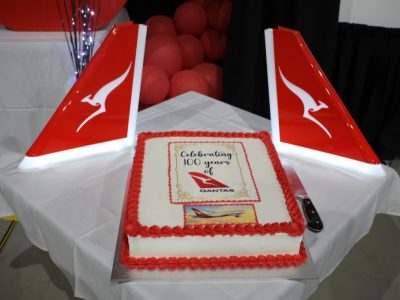 Qantas Airways recently celebrated its 100th Anniversary at the HARS Aviation Museum and the Albion Park Squadron of the Australian Air League was invited to assist in the set up and running of the event which was to be held over two days.

We first arrived on the Saturday to help set up for the Sunday BBQ. We started with a small job of inflating 100 red balloon which were to be put together in four bundles – this task took a lot longer than expected!

After this task we stopped for lunch and soon realised we were sitting across from Dick Smith. The cadets had a quick chat about his famous flights and grabbed some photos before he left. You never know who you are going to run into at HARS.

During a break the cadets took a tour through the Boeing 747 on display and chatted with some of the volunteers who look after her. They were shown all the areas where former 747 members had signed their last goodbyes to the “Queen of the Sky”.  They also had the opportunity to sit in the cockpit and get some great photos.

On Sunday morning we helped set up hundreds of chairs underneath the Boeing 747-438 VH-OJA where the BBQ meal was going to be served and before long the guests were arriving, many dressed in either Qantas pilots’ uniforms or one of the many different Qantas stewardess outfits from over the years.

Lunch was served and speeches were made by HARS President Bob De La Hunty and Shellharbour City Mayor Marianne Saliba.

The Qantas cake looked amazing and tasted just as good. Everyone had a wonderful time as the party wound down and the cleaning up started. Some of the cadets were there until 11pm helping and were asked to attend at 5am in the morning to appear on the Today Show. They were very keen even if they were only going to get a few hours sleep.

Morning came around quickly and we were back at the airport ready to go for the show and the cadets did an amazing job answering questions about the Air League live on TV.

While the cadets then went to school, I stayed to help set up the dining area which was in the hanger underneath the wings of the Connie. This Constellation is one of only two left flying in the world.

The cadets returned after school and there was not much time before guests started arriving for the Black Tie formal dinner. Everyone was dressed up to perfection and it felt like we were at the Logies!

The cadets manned the COVID safe sign in area checking everyone as they entered. One guest was Qantas captain Richard De Crespigny and the cadets immediately recognised him as the pilot-in-command of flight QF32 which suffered an uncontained engine failure in 2010, yet safely landed at Singapore Changi Airport. After signing in, the cadets asked for some autographs and he was more than happy to oblige.

Shortly before 7pm we were all led out onto the tarmac for a surprise during which the 100 Anniversary Qantas Boeing 787 performed two “low and slow” fly bys, dipping its wings to all the former Qantas aircraft on display.

We sang happy birthday to Australia’s favourite airline and cut the second amazing Qantas cake. The guests danced until the end of the night and it was a night that we wished did not end.

Congratulations to Qantas and we hope that the next 100 years are going to be even greater, safer, and more rewarding than the first 100!

More photos from the event can be seen here

The latest Federal Orders have been issued and are available for download below.

We would like to congratulate all the members who entered the online education competition that took place this year after the AAL Review was postponed with COVID-19 restrictions. The entries were of a very high standard and as a result it it made the judges’ job very difficult.

There were around 40 entries for the competition and it is great to see members working hard on their Air League activities in the midst of the pandemic.

Awards will be sent out to the winners in each category.