The Australian Air League has a varied syllabus of aviation related subjects which provides the Cadets with a grounding which is invaluable to future aviations ambitions, both as a hobby and a career.

A system of progressive badges are awarded for members to wear on the distinctive Australian Air League uniform which show proficiency in a variety of subjects and are graded so that after gaining the elementary badge, a Cadet can progress to more technical and detailed subjects. These courses are taught theoretically and practically through the use of lectures and demonstrations.

Education badges are awarded upon completion of the course of study for that particular badge and after an examination. There are both practical and theory badges, with study courses increasing in difficulty as each stage is undertaken.

Not only do the subjects provide Cadets with the theory they need for flying training, but they also provide an introduction to other aviation related careers such as 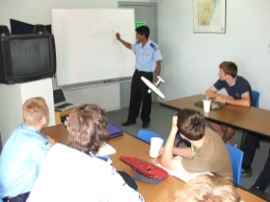 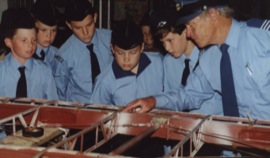 Its not all just aviation either. The Australian Air League also has a range of courses that cover a wide range of non-aviation interests, including 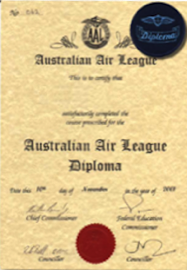 The Australian Air League Diploma is the highest education award that is available to members.

The Australian Air League Diploma was introduced into the Education System to encourage members to pursue the study of Aviation in its many forms. It is awarded to members who undertake to complete a number of set courses covering aviation and non-aviation subjects over a five year period, as well as meet certain levels of attendance, to contribute to the Squadron effort and set an excellent standard of personal behaviour.