History of the Air League

It All Started With A
Toy Wooden Aeroplane

George Robey was an Australian soldier who distinguished himself as an original ANZAC, earning a Distinguished Conduct Medal on 25 April 1915 at the Gallipoli landing. Mr. Robey was still a soldier, serving in the 17th Battalion, The North Sydney Regiment, Australian Military Forces  when in 1927 he went to Canberra to assist in the Ceremonial Opening of Parliament House.

He brought back a toy wooden aeroplane for his son Keith that sparked an interest in aviation and inspired his son to learn about aviation. That inspiration has lasted until the present day. Keith Robey through his career has been a senior executive of one of Australia’s largest general aviation companies. Keith was also a well respected aviation feature writer for “Aircraft” magazine, specialising in flight testing of aircraft.

The gift of the toy wooden aeroplane also sparked off the “Australian Air League” when five years later Keith complained of the lack of a youth organisation specialising in aviation. His father George Robey and other concerned adults formed the “Air Mindedness Development League” and on 18 July 1934 Keith was enrolled as the first Cadet member. Not long after that the name was changed to the “Australian Air League”. 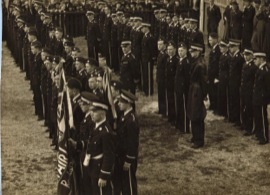 On 1st August 1934 the Australian Air League was incorporated as a limited liability company, with Robey, Captain Walter William Beale, OBE and five others as signatories. Soon after the Governor General, Sir Isaac Isaacs granted his patronage, and names of those prominent in the Sydney business world began to appear on the Corporate Members Register.

The first training Squadron opened at Manly, New South Wales on 17 January 1935 with 30 Cadets aged between 14 and 23 years (including, of course, Keith Robey) beginning their course of training. In March 1935, Manly Branch had around 90 members, and by May that same year, Branches had also been formed at North Sydney, Mosman, Mascot, Burwood, Warringah, Randwick, Bathurst, Cootamundra and Katoomba, and the idealistic aim was to open one branch per week. That same month, a Vice-Regal Ball was held in Sydney, with debutantes being presented to the Governor General. 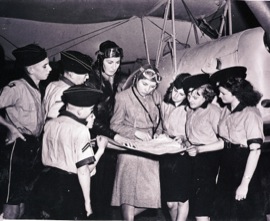 Although a girls’ section was not to be a reality for many years, it was reported in October 1935 that Rockdale Branch had established a flight of girls, and other branches were pressing for action to be taken in this area.

At a colourful ceremony at Kingsford Smith Aerodrome on 6th November 1937, the League’s aims began to come to fruition, when the first six Flying Scholarships were awarded to John W.Nichols, Wallace M. Stewart, Boden G. Fife, John H. J. Brown, Cecil C. Goddard, and Robert E. Kerr.  A weekly radio broadcast was commenced on Radio Station 2GB, and early in 1939 the League went into print with regular articles in the magazine, “Air Log”. 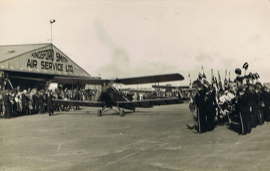 With membership climbing to around 6000, the Air League Council decided to expand the organisation into other states and as a result, in early 1939 a Melbourne office was opened. The first Company opened at Glenhuntly in March, and the response in the southern state was as enthusiastic as it had been in NSW, five years earlier. By mid 1939, 19 metropolitan branches had been formed, with membership over 700. In May 1939, the Air League established itself in Queensland, and within two months had 4 branches operating with 264 members. To cope with the expanding organisation, the publication of the first Handbook was achieved in March 1939. 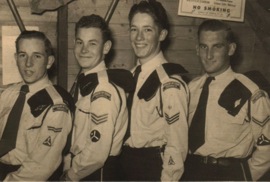 Then, on 3rd. September 1939, came the event that everyone expected but hoped would not happen, Australia was at war. Following the outbreak of war, membership increased dramatically, as young men saw the League as a stepping-stone to the R.A.A.F. In Victoria, numbers increased, almost overnight, to 2000, and reports indicated a total membership of around 10,000. On 29th February 1940, the League was saddened by the death of George Robey, after a short illness. His funeral service at Manly was attended by an impressive cross section of the Air League and business community, and included a fly-past by planes of the Royal Aero Club.

By 1942, over 26,000 boys had been trained, and the League claimed 125 Branches in operation throughout the three states. Around 5,200 were reported to have signed up in the armed forces, over 1,500 into the R.A.A.F. The League could be justly proud of its members who were serving with distinction in all theatres of war. 3000 remaining members were also serving with Civil Defence organisations. But enlistment was taking its toll. Almost all adult members had left for war service, and the organisation was hard pressed to provide sufficient officers to man companies. The acceptable age limit for officers was lowered and membership became predominantly junior. Furthermore, the whole operation in Queensland was closed owing to war regulations. 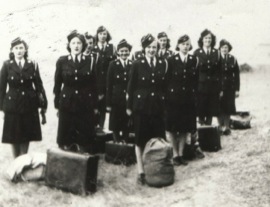 In December 1944, official approval was given for the opening of a Girls’ Section. Officer training camps started soon afterward. Before long, 1,000 girls between the ages of 8 and 15 were getting the opportunity of learning the aviation subjects that had been the sole preserve of the boys for ten years. At the same time as the Girls’ Section was formed, the Boys’ Section was re¬organised to create a new Junior age group for 8 to 11 year olds, with its own distinctive shirt of dark blue with light blue facings. This move was due to the predominantly younger membership, and recognised the different requirements of cadets under 12.
Peacetime

The end of hostilities brought a different attitude. Although many returning A.A.L. members re-joined their old units, many others, including the public at large, wanted to hear no more of uniforms and regimentation. While a number of Companies closed, the League’s administration looked to the future. 1956 saw a major amendment to the A.A.L. organisation, with changes in terminology and ranks that formed the basis of the present structure. 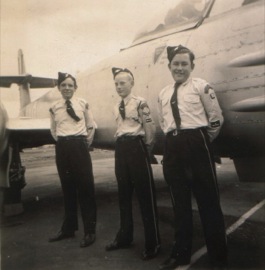 The fortunes of the League fluctuated throughout the 50’s, 60’s and 70’s. Squadrons opened and closed and activity in many country areas started with a flourish, but often faded away – distance from the main area of activity often being a contributing factor in a squadron’s early demise. During this period the Air League remained a mainly metropolitan organisation based in Sydney and Melbourne. after a few abortive attempts Queensland was re-opened in the 1970s followed by the ACT and eventually South Australia. 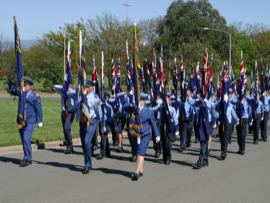 Today the Australian Air League is a national youth organization for boys and girls from 8 years of age and over. There are currently more than 80 Squadrons active in Queensland, New South Wales, Victoria, the ACT and South Australian, with more Squadrons continuing to open.

It continues to build on the ideals formed by its founders over 70 years ago, to promote an interest in aviation both as a career or as a hobby in the youth of Australia, to provide opportunities to develop good citizenship, teamwork and to develop ingenuity and resourcefulness of members. 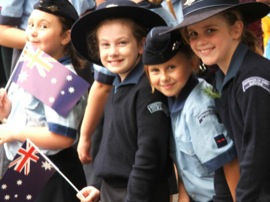 Will you join us?