Australian Air League cadets are trained in various types of Ceremonial Drill, for Field Competitions and Parades. Drill assists Cadets to acquire self discipline ands also teaches them to work together as a team. It also provides leaderships training to the Cadets chosen to be NCOs as they are put in charge of a unit and are responsible for their training.

There are several different types of units in the Australian Air League including:

A Section is the smallest drill unit and is made up of 5 Cadets and an NCO in charge, normally a Corporal. One of the Cadets in the Section may also be a Leading Cadet, the first NCO rank, and would be expected to assist the Corporal in their duties.

As a Section the Cadets can take part in marching competitions against other Squadrons, or form together with two other sections to form a flight. 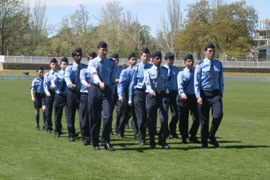 A flight is made up of three Sections that join together to march as a Flight, under the command of an NCO in charge, normally a Sergeant. A full section compromises of fifteen Cadets (three of whom may be Leading Cadets), and three Corporals under the leadership of the Flight Sergeant. An Air League Squadron can have one or more Flights, each with its own NCO in charge. 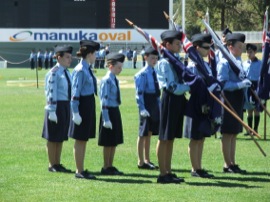 A full flag party consists of 3 Flag Bears, typically NCOs selected from the Squadron’s Corporals who carry the ‘Colours’, or flags of the Squadron. They are supported by three Escorts, who are normally Leading Cadets although at times Cadets may also be chosen. The Escorts should not be higher in rank than the Bearers. The NCO in charge should be a Sergeant, although if a Sergeant is not available the NCO in charge must be of a higher rank that the other members of the Flag Party.

While normally a Flag Party would comprise seven personnel in total, Squadrons may parade a small Flag Party made up of a single Bearer carrying the Squadron Flag, along with two Bearers and an NCO in charge. Wing, Group and Federal Flag Parties would also parade one flag, although typically these Flag Parties would be composed of Officers, or Trainee Officers and Warrant Officers where necessary. As well as learning the drill necessary to take part in the Flag Party, the Cadets in the Flag Party also learn the symbolism and history of the Colours they carry, as well as the customs and courtesies associated with their use. 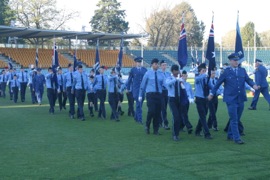 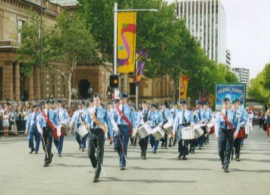 Several Squadrons, Wings and Groups throughout the Australian Air League also have marching bands, made up of Cadets and Officers with an NCO in charge who is the Drum Major. The Drum Major is equivalent in rank to a Sergeant, although whilst in the band they are in charge of all personnel, including Officers. 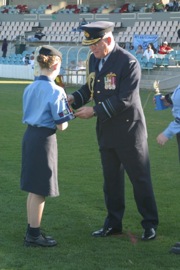 Aside from participating in Community street parades and festivals, there are a number of organised competitive Parades held within each Group every year. Squadrons compete against each other in Band, Flag Party, Flight and Squadron drill and trophies are awarded for the Squadrons judged best in each competition. These parades also help promote the League to the public and provide recruiting and public relations opportunities.

Reviews are held by each Wing and Group annually and Nationally every two years. Reviews differ from Parades in that they are more intensive competitions covering every aspect of Field Activities and are usually held over an entire day, or sometimes over two days.