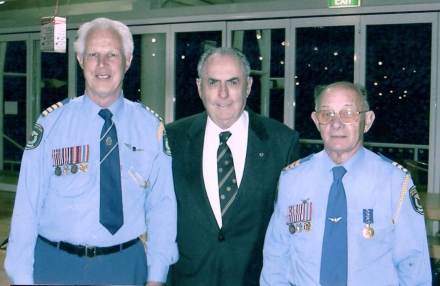 The motoring world was saddened to learn of the passing last month of three-time Forumla One world champion Sir Jack Brabham, aged 88. Much has been written of his motor racing accomplishments, including 13 pole positions, 13 Grand Prix victories and three Formula One world championships – in 1959, 1960 and 1966. Sir Jack was the only Formula One driver to have won a championship in a car of he built himself.

Besides being an icon of motorsport, Sir Jack also had a life long interest in aviation and would often fly his own light aircraft to race meetings around the continent. As a young boy he had been a cadet of the Australian Air League before the war, and in 2002 he was a special guest the Australian Air League Review on the Gold Coast where he spoke of his love of flying.

“My first flight in an aeroplane was sitting on my Mother’s lap in a Tiger Moth from a sand bank at Gunnamatta Bay near Cronulla when I was about 5 or 6 years of age. A few years later my Mother and I went with Sir Charles Kingsford Smith around Sydney Harbour in his Percival Gull only months before he disappeared. I think he was doing pleasure flights to finance his trip to England.”

Sir Jack became a cadet in the Hurstville Squadron of the Australian Air League, meeting each Friday night at the local Primary School. He had set his sights on joining the Air Force as a pilot but unfortunately this wasn’t to be.

“I joined the R.A.A.F. as a pilot when I turned 18 but it was late in the war and they had too many pilots and so did 2 years as a flight mechanic in Beaufighters and Mosquitoes at Williamtown near Newcastle.”

“After the war I started my racing career in 1947 and it was not until 1959 that I had the chance and money to learn to fly. My instruction was in a Chipmunk and after four and a half hours had my first solo flight. I then bought my first aeroplane, a Cessna 180 to fly around the Continent to race meetings.”

At the time he was a guest of the Air League, he still held a pilot’s license but had not flown for a number of years. He had accumulated over 5,500 hours flying and mentioned the highlight for him had been flying a Beechcraft Queen Air from London to Sydney in 1969.

Sir Jack Brabham is survived by his wife, Lady Margaret and his sons Geoff, Gary and David.