The F-16 Flight Demonstration Team from the United States Air Force 54th Tactical Fighter Wing, based at Misawa Japan, hosted an inspection of their F-16C Fighting Falcon aircraft by members of McCormack Wing’s Ballarat, Mill Park and Sunbury Squadrons. As they looked over the aircraft also known as Vipers, the cadets and officers were provided with a great chance to get close to the plane and also learn about the team’s experiences in both flying and supporting these remarkable aircraft.

In over an hour’s friendly conversation, they were told stories of the concentration involved in air-to-air refuelling, long flights in cramped quarters (An F-16 has no toilet!) and long working hours whilst thousands of miles from home base. Their stories provided not only a wonderful insight into the incredible behind-the-scenes effort that is required to put on that short 15 minute flying display, it also each of the crew’s immense pride in the work that they do and their enjoyment in providing experiences like this.

During their chat, our hosts were happy to point out that unlike a number of other aircraft that appear at this airshow, their F-16s were actual combat veterans with one having only recently completed a series of missions in Iraq and Afghanistan.

The pinnacle of their visit was undoubtedly when our hosts kindly offered the cadets the chance to climb up and inspect the aircraft’s cockpit. Nearly every cadet, officer and accompanying family member jumped at this opportunity. Sitting over 2 metres above the ground, the reclined seat and bubble canopy of the F-16 has possibly the best visibility of any combat jet fighter. 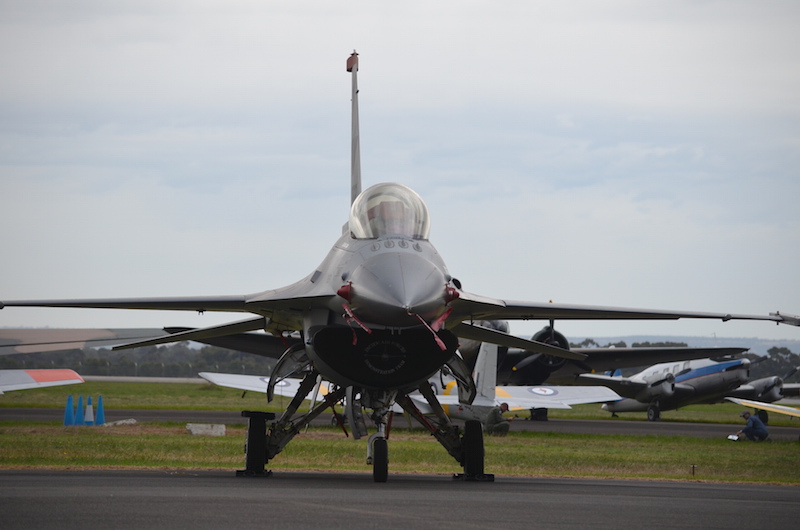 Their amazing experience was complete personal invitations to view their demonstration from its real start. In wonderful choreography that started EXACTLY on time, the pilot, ground crew and plane worked together in an amazing show of precision drill, movement and interaction as each went about readying their aircraft for flight. The cadets were entertained by the team as they undertook a precisely coordinated arrangement of inspecting surfaces, closing panels, starting of engines and checking flight controls, topped off with a snappy salute as the support crew released the Viper for flight.

Our sincerest appreciation goes to “Code”,” Shane”,” Droop” and all of the members of the 54th Tactical Fighter Wing, United States Air Force (PACAF) for their wonderful hospitality in providing our members with this incredible experience.