During May the cadets of the Australian Air League Squadrons at Bundaberg and Hervey Bay had a special treat with a visit by the RAAF’s formation aerobatics team, the Roulettes. While they weren’t able to put on displays due to problems with their aircraft, the cadets enjoyed talking with the the pilots and gaining valuable knowledge on what is required to become a pilot in the RAAF.

The Roulettes visited Maryborough on 28th May and invited the cadets to try out their flight simulator. The cadets had a great time trying on the flight gear and flying the F/A-18A Hornet in the simulator, getting the chance to “fly” over Hervey Bay and Fraser Island, as well as performing aerobatics like loops and rolls. In was a great opportunity for the cadets to feel like they were flying a real jet and they all enjoyed experience. 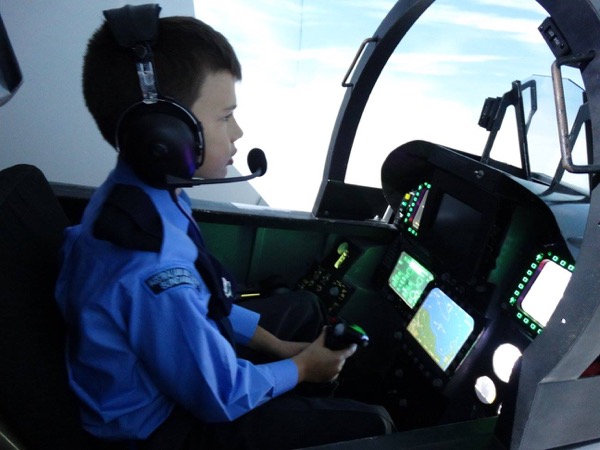 The cadets also had the opportunity to talk with pilots and other RAAF staff and gained valuable knowledge on what is required to become a pilot in the RAAF.  The day ended with the cadets receiving information on the defence forces and some free gifts of caps, rulers books and stickers. WIN News was also on hand and interviewed the cadets and officers, featuring on the local news on Monday 30th May.

The following day the Roulettes visited Bundaberg and the local Squadron also had the opportunity to speak to the pilots and try their luck at the flight simulator. Cadet Rhys Sharp was one of the cadets who attended the visit,

“During the visit by the RAAF Roulettes I found the entire experience fascinating and helpful towards my understanding of aviation education. I learned a lot about equipment the pilot uses during their flight such as the G-Suit and Survival Gear. I also learned about key fighter tactics within their portable fighter simulators. I have been considering a career in the RAAF for some time and being able to speak to the Pilots and Crew has increased my awareness of what I need to do to make this happen.””

Cadet Samantha Goodwin adds, “When we visited the RAAF Roulettes at the airport we also got to see 2 Army helicopters and talk to the pilots. We were introduced to the RAAF crew and instructed on what we would be doing in the flight simulator, how to fly and what the controls were. We also got to try on the G-Suits, which feel like cowboy chaps and are tight when blown up. The G-Suit is designed to help the blood stay in the upper body during G Forces and help prevent passing out. In the flight simulator we got to take turns being Air Traffic Controllers as well as Pilots. The Flight Instructor taught us to lock onto a target and fire a missile at the other pilot. I took a direct hit! On the day I learned a lot about the RAAF Roulettes and the RAAF in general.” 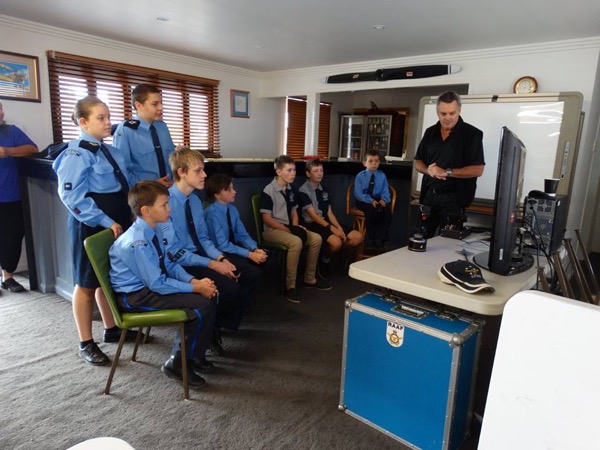 After the visit Sqn.Lt. Di Ballard summed up the day, “The RAAF Roulette visit was a great eye opener for the cadets and officers that attended. All of the questions were answered thoroughly, thoughtfully and on a level that each cadet could understand, which was outstanding as we have a broad age span of cadets from 9 years to almost 16 years. The knowledge base was impressive and no question went unanswered.

With the mention of the flight simulators and the chance to ‘fire a missile’ the challenge was set. With two cadets in air traffic control and two cadets in the flight sims, they received a crash course in flying and locking onto their target. Most survived, but one became the virtual casualty of a well instructed missile takedown. Squadron OC KyleGraves had no such luck when he challenged Sqn.Lt. Ballard!”

A big thank you to the RAAF Roulettes arranging a fantastic day!

Photos from the day can be seen here.