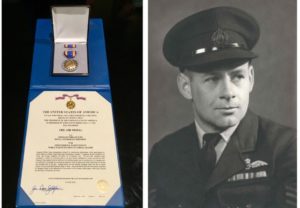 At a ceremony at the Australian War Memorial in Canberra, RAAF Flying Officer Phillip Zupp MID was posthumously awarded the United States Air Medal for his actions during the Korean War. This presentation was made by Charge D’Affaires A.I. Mr. James Caruso and accepted by Zupp’s son, Owen Zupp who is himself a Qantas pilot and author.

The Citation for the US Air Medal reads.

“On 6 February 1952 Sergeant Phillip Zupp distinguished himself by meritorious achievement while participating in aerial flight as a Meteor Mark Eight type aircraft pilot, Number 77 Squadron, Royal Australian Air Force, near Kimpo, Republic of Korea, on 6 February 1952. On that date, Sergeant Zupp conducted a search for a downed pilot in an area heavily defended by enemy anti-aircraft fire. Sergeant Zupp sighted what he believed to be distress panels and in coming down to a dangerously low altitude to investigate he received an explosive burst of enemy fire which destroyed his canopy and wounded him in the face. Despite shock and low altitude Sergeant Zupp was able to regain control of his aircraft and return safely to base. The professional skill and airmanship displayed by Sergeant Zupp in the dedication of his service to his country reflect great credit upon himself and the Royal Australian Air Force.”

Zupp had previously served during World War Two with the Australian Army in the 2/10 Cavalry Commando Squadron before re-enlisting in the RAAF in 1949, firstly as a mechanic before being selected to undertake flying training. In Korea he flew 201 fighter missions and was “Mentioned in despatches” by the Commonwealth.

Following on from his RAAF service, Phillip became a civilian pilot are accumulated more than 23,000 flying hours in areas as diverse as charter flying, flight instruction, Qantas, scientific research flying in to rain-making and aeromedical sorties for the Aerial Ambulance.

His story is record in the book “Without Precedent” written by his son Owen.