At the recent Cadet of the Year selections in February, Sergeant Maia Hulin of Doyalson Girls Squadron NSW was named 2014 female Cadet of the Year. With five brothers and sisters in the Air League, the Hulin family is certainly an “Air League family” and we recently spoke to their mother, Mrs Janelle Hulin about what the Air League means to them. 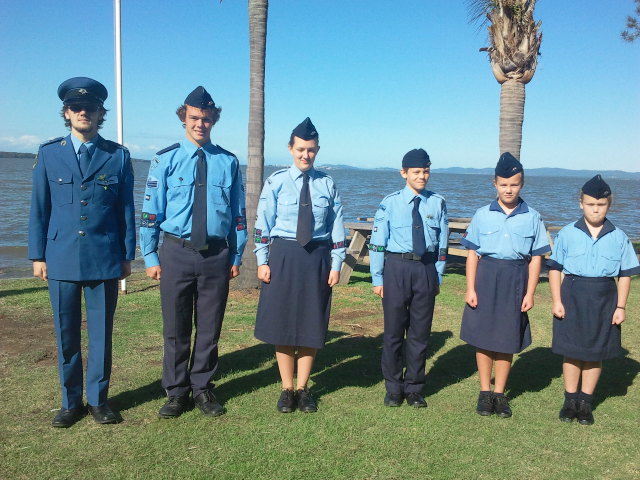 It’s 6.30 on a Sunday morning in September and we have six pairs of shined shoes waiting. One Officer hat and five forage caps. One Officer tie and three Cadet ties. Two sets of Senior Cadet epaulettes and two Junior Cadet shirts. Six sets of authority cards and four lanyards. Three girl’s hair brushed ready to pin up and gel. One mace and gloves. Aircraft models are carefully stowed in shoe boxes. Lunches are made. Snacks packed. Drink bottles filled. GPS is programmed and van loaded. One last uniform check before we head out the driveway. Do we have everything? Yes? On the road again to the NSW Groups Review.

Actually, we do most of the preparation the night before. Chasing down a lost lanyard in the half light of early morning does not improve the collective family humour. Especially with a two hour road trip about to begin.

Each year we make the trip to Sydney from the Central Coast to participate in the Groups Review. Our six children are divided evenly between Toukley Boys and Doyalson Girls Squadrons. Once at the Review my husband Neil and I spend our day trying to catch the highlights of each Squadron’s day. Occasionally we meet up and compare notes. Did you see? Yes, I caught that one, or Oh no! They’ve already marched.

Our Air League adventure began when a friend who’d been in Air League as a boy saw Toukley Squadron at an Australia Day celebration and thought we just might be interested. With a pilot in the family and a half built aeroplane in the garage the answer was Yes! Bryn and Kael joined Toukley squadron straight away at 12 and 14. A few months later we discovered the girls squadron at Doyalson and Maia, then aged 9, was excited to join up. Once the youngest three kids reached their 8th birthdays off they’ve gone to Air League too, keen to follow their older siblings. 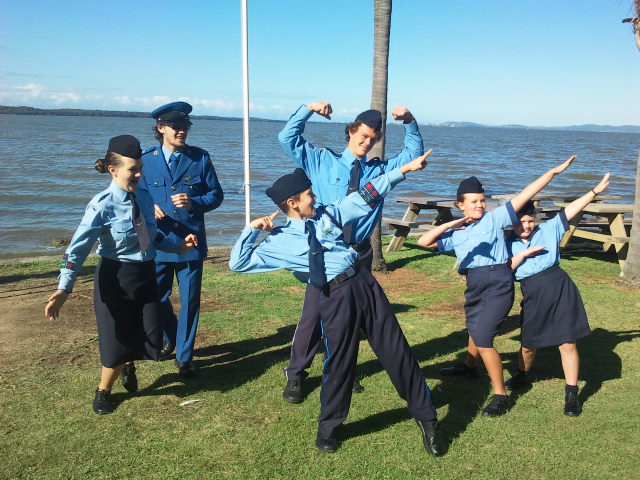 As shorts and short sleeved shirts have changed to long pants and shirts with ties we have stuck with Air League. For a while Friday night jobs curtailed attendance at parade night and one teen stepped out of Air League for a year to pursue other interests. In the end they considered Air League worth coming back to.

What is it that makes us want to stay? The kids love it. The involvement and belonging. Corporate goals and the thrill of competing and sometimes winning. Camaraderie and camps. Shared interests and connections with other cadets. It’s something that we do as a family and enjoy the friendships we’ve made Air League wide.

We’ve watched the squadrons both grow both in size and in height. Shy junior cadets now Sergeants with poise and confident leadership skills. Senior Cadets becoming Officers and, can it be, getting married? It’s great to watch cadets join, meet new officers, encouraging each other and to enjoy belonging to a youth organisation that values discipline and learning. For my family Air League is fun, rewarding and worthwhile.

Bill playing for Australia in 2012On 29 August the Paralympic Games 2012 will open in London and among the athletes representing Australia will be basketball player and former Australian Air League cadet Bill Latham.

After a tractor accident that occured when he was 5, Bill received injuries to both legs that saw him in Westmead Children’s Hospital intensive care for two months and confined to a wheelchair for the next six months. Following multiple operations over several years Bill learnt to walk with the aid of crutches, and in 1999 he joined the Coffs Harbour Squadron of the Australian Air League.

During his time in the Australian Air League he joined in all of the activities the other cadets took part in, including gliding, flying and camps with lots of tumbles, leeches and a whole lot of fun. He would ask for no favours during his time in the Australian Air League, and when offered a car to drive him to the Cenotaph on ANZAC Day he politely declined, saying he would march with the rest of the cadets even with callipers on his legs.

As well as being involved in the Air League, Bill also began swimming as part of his therapy. He soon began to excel at swimming and won too many medals and broken too many records to mention here, although some of the highlights include 5 gold medals and 4 new age records at the 2003 NSW State disabled titles, another gold medal at the 2004 Catholic Schools State and 5 NSW state age records at the 2005 Disable Sports Swim meet. 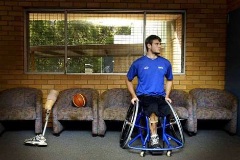 Bill LathamSwimming wasn’t the only sport Bill was inolved in, he was Australian Junior Lawn bowls champion in 2003, as well as winning 3 gold medals at the 2003 State disabled titles for discus, javelin and shot-put. In 1999 he was also invited to play wheelchair basketball in a local team, and he unfortunately had to leave Air League due to the demands of sports and training.

Around age 13, he was faced with a decision on operations that would see him out of sport for over a year with no guarantee of a successful outcome and after much discussion and with the support of his family and some of his fellow players in basketball he made the decision to amputate his leg.

Pretty soon Bill began to shine as a wheelchair basketball player, playing in Junior National teams and later in the Australian Rollers mens team in 2006. He ceased swimming to concentrate on his basketball, just missing out on the 2008 Beijing team. In 2010 he was a part of the Australian team that won gold at the World Championships in Birmingham defeating France 79-69, and he was also contracted to play for Seville in the Spanish National League. This year he was selected as a part of Australia’s Paralympic team, possibly the highlight of his career.

Bill faced many challenges having missed so much school due to operations and doctor appointments, being excluded from activities as he couldn’t keep up, and having people stare and ask questions about what was wrong with him. Bill has overcome these issues by focussing on his goals and and accepting his disbility and find the good things that come with it rather than the bad. Sports have offered him many opportunities that he might not otherwise have had including travel to England, Europe, Indonesia, New Zealand, the USA and Japan.

As part of his plans Bill set himself 2 and 5 year goals in 2007 and he has now accomplished them with his Paralympic selection. In life you need to set goals and go for them or those goals become merely dreams and are soon forgotten. Achieving at a high level and gaining recognition from family and peers has been extremely beneficial for his self esteem, when kids stare and ask questions now he recognises they are just curious (and sometimes has a little fun telling them a shark bit his leg off!)

eam bring back plenty of gold for Australia!

Our thanks go to Bill and his family, and to Coffs Harbour OC Ean Rosenberg

My name is Megan Aylward and I am a cadet in NSW Girls Group of the Australian Air League. Recently I had the chance to have my first helicopter flying lesson, a trial instructional flight in a Robinson R-22 helicopter from Bankstown Airport. 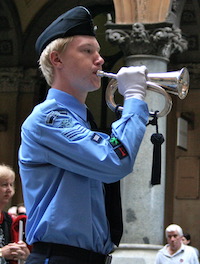