The cadets of the Australian Air League recently had a weekend they won’t forget with a visit from the RAAF Roulettes aerobatic team to the Illawarra Regional Airport followed by the homecoming of Teen World Flight Pilot Ryan Campbell.

Departing Wollongong on June 30, Ryan had set out to become the youngest pilot and first teenager to fly solo around the world with the goal of inspiring young people to take flight, and allow their dreams to take flight too. The Air League cadets had followed the progress online of Ryan’s little Cirrus SR22 aircraft as he circumnavigated the globe and were looking forward to seeing his return on September 7.

A few weeks before the scheduled return, the Australian Air League at Albion Park received a call from FLTLT Ross Laves of the RAAF Roulettes aerobatics team. A former Air League cadet himself, Ross explained they would be flying to Illawarra Regional Airport for Ryan’s arrival and would like to visit them the night before!

On Friday afternoon the cadets assembled at the airport and were treated to a fantastic display as the Roulettes performed a show directly above them before landing and taxying their Pilatus PC-9/A aircraft in to meet the cadets. The cadets were able to get up close and personal with the aircraft and pilots before retiring into the hanger where the Air League meets each week. 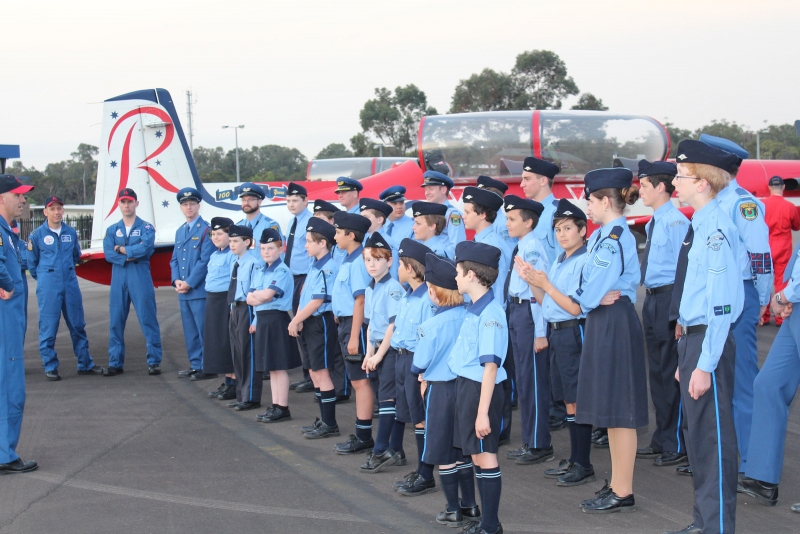 Seated in between an F-111 and Super Constellation belonging to the Historical Aircraft Restoration Society, the cadets were entertained by a video presentation on life in the Roulettes. It turns out a Super Constellation aircraft also makes a great impromptu projector screen!

The Roulette pilots and ground crew took turns in explaining just what it takes to be a RAAF Instructor and of course being a Roulette. Topics included physical fitness, diet, training hours, education, shows they perform at, how to handle up to 6 G’s of force and the equipment they use. The ground crew were also quizzed with questions about their roles, rank positions and what they enjoyed about being the ground support crew. The night ended with a BBQ dinner provided by Air League Officers and the cadet’s parents, a great time was had by all.

The following morning saw an early start as the Teen World Flight crew prepared for the arrival of Ryan Campbell and the Roulettes put on an aerobatic display above the airport.

Shortly after 10.00am, Ryan Campbell arrived home and landed his little Cirrus aircraft to a huge applause from the assembled crowd. Taxying to the point he’d left 10 weeks earlier, 19 year old Ryan had broken the record for the youngest person to fly a single-engine aircraft solo around the world.

After speaking to the crowd Ryan was escorted away for an interview with Charles Wooley from 60 Minutes, but not before stopping to shake hands with the cadets. They thought that was fantastic, however soon after they were also invited back to a private party with Ryan, his family and support crew! Here they had the opportunity to ask Ryan about his flight, and get a few “selfies” with him.

This was definitely a weekend that the cadets from the Australian Air League won’t forget in a hurry, and they would like to thank Ryan Campbell, his family and crew, and the RAAF Roulettes for making the occasion special.

About Ryan Campbell and www.teenworldflight.com
Ryan Campbell is the youngest pilot and first teenager to fly solo around the world. His aim is to inspire youth to take flight, and for their dreams to take flight too, in whatever field that may be. More information can be found here.