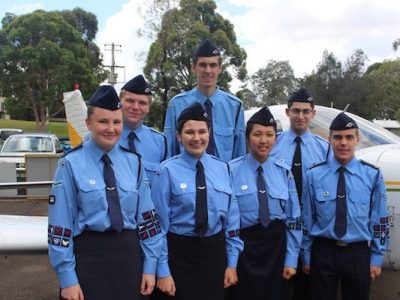 Over the recent weekend at the NSW Goys’ Group Air Activities Centre at Camden, NSW the annual selection of the League’s Cadet of the Year took place.
The candidates for this year’s consideration were:

Whilst the Council of the League met on the Saturday, the candidates were shown the sites of Sydney including the Powerhouse Museum as well as enjoying a ferry trip on Sydney Harbour, visiting the Opera House and other sites.

Sqn Capt Kyle Laing, who is the assistant to the FTC, was their host and mentored and managed the candidates throughout the weekend.

After dinner, and as part of the Cadet of the Year evaluation process, all candidates are required to make a 15-minute presentation to enhance their opportunity to be selected as the League’s Cadet of the Year. This year the topic of their presentation was “The 2016 Air League Review: How to make the event memorable and fun”.

All of the Senior Officers present marked these presentations taking into account delivery, confidence and relevance.

A return to the accommodation and a good night’s sleep as breakfast was being served at 0645 on Sunday.

The Sunday activities commenced at 0730 with a return to the Camden Airport and included flying conducted in the League’s owned aircraft VH-UNL operated by the NSW Boys’ Group Air Activities pilot, Keon Little.

Around the flying schedule we conducted uniform inspections, knowledge assessments and individual panel interviews, the results from which are entered in to a weighted analysis matrix to ascertain the successful candidates.

The matrix used is weighted as follows:

After lunch the results were announced in front of the League’s senior Officers. The winners were:

On behalf of the Australian Air League Inc., may I extend hearty congratulations to the winners and commiserations to their colleagues who were not successful.

To miss out on selection in such company is no disgrace as those selected, to represent their Groups, were truly outstanding in all aspects and, as previously stated, their parents, officers and colleagues can be very proud of them.

The League’s thanks go to the NSW Boys’ Group for making the venue available, the NSW Boys’ Group Air Activities staff that assisted throughout the weekend and to the Debbie and Mark Perinich who provided the assembled group with a fabulous BBQ lunch on the Sunday.

All who attended the weekend should be proud of their individual contribution in making the weekend a success, and for providing our candidates with a weekend that they will not forget quickly.